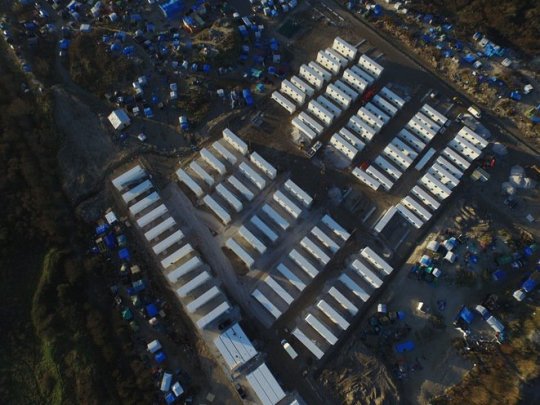 As the state works to gradually demolish the Calais jungle, herd 1,500 people into a ‘container camp‘, and hope that the thousands of other inhabitants will just disappear, we share this info on some of the project collaborators. Most of the research comes from Cette Semaine, loosely translated by Rabble.

Here are some of the companies getting a slice of the 18m-euro cake.

This small to medium sized company is an old friend of the police and military, as it already worked with Sodexo Defense Services to supply containers to Mururoa (French-colonised Polynesia, and site of decades of French nuclear testing) in a 30m euro contract. Logistic Solutions also supplied the French Defence Ministry with containers for a NATO event in Poland in November 2013, and includes the Egyptian military amongst its customers. For more on its partners, see here.

Logistic Solutions has been supplying containers to Calais since 7th December 2015.

This company is supplying the biometric technology for the container camp and has been a provider of security services for the (la Vie Active-run) Jules Ferry Centre and jungle ‘buffer zone’ since March 2015 (30 security guards and dog handlers). Biro is apparently looking to hire six more guards for the new camp. Biro is doing particularly well out of the ‘migrant crisis’ in the region, as it is also providing ‘secure parking’ for lorries near the motorway, and further afield secures the Saint-Laurent rest stop at Steenvoorde, Belgium, which has also been the site of other migrant ‘jungles’.

This is a humanitarian NGO that was spotted helping escort a flatbed truck moving containers in and out the jungle.

La Vie Active were selected over the Red Cross to run the camp in October 2015.

Chairman of the Board of Directors: Alain Duconseil.

The charity is a ‘public services’ organisation and runs 70 sites across a range of sectors, primarily the elderly and disabled. The charity runs the Jules Ferry ‘day centre’ near the Jungle, which also serves as sleeping space for women, who are treated like prisoners. Calais Migrant Solidarity have documented also La Vie Active trying to persuade people to leave parts of the jungle scheduled for demolition.