(See this article on corporatewatch.org)

Calais’ mayor has being trying to rebrand the town as a “city of flowers”. But as locals told Corporate Watch last month, “city of barbed wire” would be more apt. From the port to the tunnel at Coquelles, the town’s periphery is now a nightmarish landscape of razorwire fences, cameras and motion detectors, earthworks, trenches and flooded fields, all designed to stop the “wretched of the earth” taking the cross-channel journey that European citizens take for granted.

All this means money for the construction and security companies who supply the border infrastructure. Back in 2016 the Calais Research Project started to list and profile firms involved in the border business. Here is a quick update on some new landmarks added since then.

There are two main border-crossings in Calais: the port, next to the old town itself; and the channel tunnel, a few kilometres out of town at Coquelles. Next to the tunnel entrance is a giant shopping centre called Cite Europe, popular with locals as well as British travellers stocking up on booze.

Right next to that is a complex housing the French police’s official anti-migrant infrastructure: the main base for the PAF border police and CRS riot police; a court where migrants’ cases are heard; and the migrant detention centre – “Centre de Retention” in French.

In November 2018 a new building was added to this. In French, it’s called the CCIC – standing for “Centre conjoint d’information et de coordination franco-britannique”, or joint French-British information and coordination centre.

According to an Agence France Presse report, the centre is funded by the British government, “notably equipped with drones”, and acts as a joint command post for French and British police forces. These include the French PAF, Customs (Douanes) and Gendarmes, and on the British side the UK Border Force, Kent police, as well as the National Crime Agency (NCA).

On the day we visited we didn’t see any drones flying off the roof. The parking lot was full of unmarked cars rather than marked police vehicles, including several with British number plates. There was still a plaque up outside the centre (see photo) naming the contractors involved in building and equipping it. It gave the cost for the work as Eu 1.844 million. 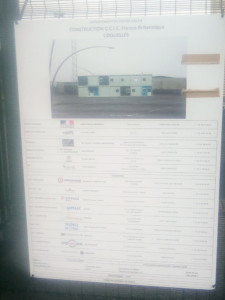 Directly across the road from the CCIC is Coquelles detention centre. Currently this has space to lock up 79 men, but the French state wants to expand that. At the end of March 2019 it announced plans for a 480 square metre extension. The architects overseeing the work are from a local firm called COAST, working with BD engineering. 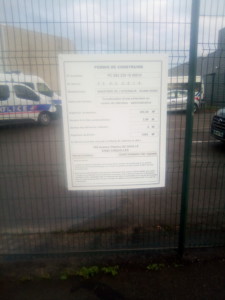 Just outside Coquelles, we saw major new works on both sides of the main highway leading to the tunnel. These are big bunkers, each with a number of bays for lorry searches. In fact these are not primarily anti-migrant measures, but the new lorry park and custom posts being built hurriedly by Eurotunnel in case of new goods checks post-Brexit.

However, they are also adding to the extreme security measures reshaping the environment around Calais. The bunkers are protected with moats as well as new fencing – canals and artificial lakes dug and filled with water, as another measure against unwanted humans. This follows the pattern of deforesting and flooding that Eurotunnel started in 2016.

One little industry that’s sprung up out of the “refugee crisis” is Secure Lorry Parking. The UK government fines truck haulage firms if people are found travelling in their vehicles without the right documents. This effectively means outsourcing border checks to truckers, who are anxious not to be caught with stowaways. In turn, the truck firms will pay out for secure places to park up before they make the crossing.

Recently we heard of a new development in this business. Passenger coaches operated by Flixbus are also using Polley’s security services. Coaches on the way to the UK pull into Polley park before they head for the tunnel. Here they are given an initial search by one of the company’s private security guards, checking for stowaways in the baggage area. This is in addition to two further checks by French and then UK authorities once they get to the tunnel.

Flixbus and Polley give little public information on this extra control. There are vague references to it on Flixbus’ website, where it is described as a “pre-UK check”.

The final stop on our border infrastructure tour was right in the heart of Calais town itself. We had heard that the old practice of constantly stopping and harassing people who look like migrants in the town centre has largely been phased out. So we were wondering why we kept seeing CRS riot vans buzzing around the main streets between the town hall and the theatre.

Then we realised their main activity was dropping off and picking up burly white men in casual attire outside the Brit Hotel. Locals explained that this hotel building had been empty for many years, before being reopened under its new name in 2016. Its initial clientele seem to be almost entirely riot police and gendarmerie – although if you fancy being bunked next to a hunky CRS musclehead, you too can book a room for around Eu 50 a night. Brit Hotels is a France-wide hotel franchise chain.

While the UK’s plans for the “Great Wall of Calais” hit headlines, an even bigger Calais security deal has gone quietly unnoticed: an £80 million privatisation of much of the border security in Northern France.

Without any fanfare from the Home Office, an advertisement appeared on the European public tender website “TED” on 9 July.1 It requested companies to bid for an estimated £80 million contract to provide “40 Authorised Search Officers, 24 hours per day, 365 days per year” for the Eurotunnel, Calais and Dunkerque ports. Three of the staff on duty must also be trained as “detainee custody officers”, responsible for holding arrested migrants in the Home Office’s detention facilities at the ports before they are handed over to French border police.

This is by far the biggest private security contract yet announced for Calais. It also signals a massive privatisation of border security: these jobs are currently done by Home Office Border Force officers. The exception is management of the detention “holding facilities” at the Eurotunnel and Dunkerque. This is already outsourced to Tascor, a Capita subsidiary, as part of another mammoth border security contract for all deportation “escorting” and short term detention facilities. That contract is also currently up for re-tender. The Home Office also has smaller private contracts in Calais for security dog handlers, won by a company called Wagtail, and with security company EDS Cork in Dunkerque.

The deadline for applications for the new mega contract has now expired, on 18 August. There hasn’t yet been an announcement about who hit the border guard jackpot. Besides Tascor, other favoured Home Office contractors include G4S, Serco, Mitie and GEO, who all run detention centres on the UK mainland.

In more detail, the contract includes:

“vehicle searching (freight and tourist vehicles), searching of persons, detention and escorting services. The Contractor is required to provide teams of Authorised Search Officers who will: search vehicles by using detection technology or by working collaboratively with another Contractor contracted to provide detection dog teams; and escorting functions which may require the detention of an individual, for a period which is as short as is reasonably necessary and which does not exceed 3 hours, pending the arrival of a Border Force Officer or other authority to whom the individual is to be delivered.”

To put this deal into context, here are some of the largest previous funding announcements about “security” in Calais in the past years, which don’t reach £80 million between them:

On 20 August 2015 in Calais, Bernard Cazeneuve, Minister of the Interior, signed an agreement with his British counterpart, Mrs Theresa May, providing for a strengthening of security measures […] Exceptional resources were provided to ensure its security and prevent intrusions by migrants trying to reach the United Kingdom. […] Today’s agreement states that the British government will devote euro10 million over two years to strengthening police cooperation and providing additional resources to make the site secure, financing security fences and CCTV cameras. It will also help Eurotunnel increase the number of its security staff from 150 to 250.
[…] 12. Since the end of June this year, as a result of increased security at the port, migrants have switched their focus,
seeking to gain access via the Coquelles and Cheriton railheads of the Channel Tunnel (including at significant risk to their own lives).”
No fences will ever stop people from trying to reach UK. More fences, more police, more gas, more  broken legs, more death. That is all you get for your millions of pounds. The only way to stop the killing is to fucking open the gate to the UK that the humans who are stuck here don’t have to risk their lives but travel in security and dignity.

One day you going to be pay off for the people you are killing on the border here in Calais. You know that with every euro you invest in the “security of the border” you are driving humans to death and suffering.

Earlier this month the UK government approved giving the 9ft ‘ring of steel’ fence that was used during the Nato Summit in Wales to be reused to secure the Calais border.

And following on from this, Britain and France have drawn up a further agreement for the UK to fund securing the port of Calais to the tune of €15 million over three years.

In a Joint Declaration by France and the UK on September 20th, it states that the UK will give up to another 5 million per year for three years to fund controls of the border.

picture of the fence taken from AP

As a response to the increased numbers of people in Calais, the UK government has now approved giving the 9ft ‘ring of steel’ fence that was used during the NATO Summit in Wales this last week to further secure the Calais border.

The fence, which was already coined the “Stalag Luft 12” during the NATO Summit, in reference to the high security Nazi Germany prisoner-of-war camps, is 12 miles long and was installed in Newport and to surround Cardiff City Centre to stop supposed ‘terrorist attacks’… And is now going to be re-purposed to try to stop immigration.

Its an increasingly familiar story as the strategy and tools, surveillance systems and technologies, fuelled by governments and industries, in the name of ‘Security and Defence’ become more and more merged with those for ‘Immigration’.. until they become one and the same thing.

Two men have been shot last night by a security guard in a parking of the ferry port. One was shot in the arm and has been allowed to leave hospital, the other was shot in the back and is right now in surgery. Once again it is clear that there is no limit to the repression of migrants.