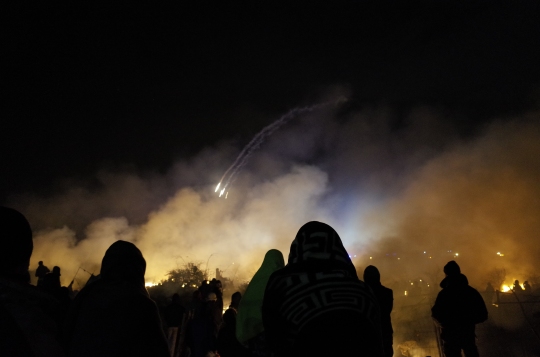 The police fired gas for over half an hour with different degrees of intensity. In the moments of greater intensity, people were scared to cross the street, for fear that the police would fire yet more gas canisters. In that time one hundred residents of the jungle, tired of being gassed again for no reason, burned a large fire made up of leftover materials of the houses and tents in the eviction zone, cleared after the French prefecture order of Monday January 11th.

At each house, tent or furnishings transformed into a bonfire residents shouted. Many of the cries were: “Jungle finish” and “Fuck you police”. Some people threw stones and other objects at the police, who in this moment were unable to effectively gas the people due to the wind direction, leading to most of the CS gas drifting back onto the police. Around twenty people started to dance defiantly in the middle of the main road of the jungle, creating a near apocalyptic scene. 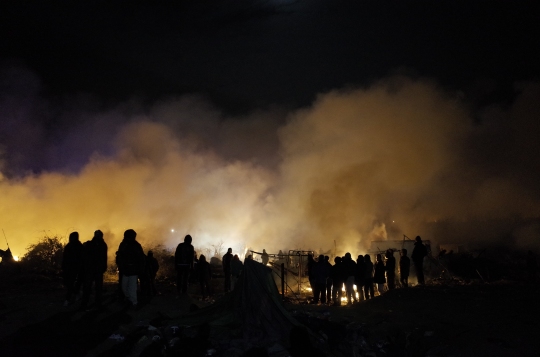 The police again attacked the jungle on Tuesday morning at 5:00am. They started to fire gas from above the motorway bridge and fired deeper into the jungle, possibly in order to intimidate people from considering any attempt to create a traffic jam, possibly to make the area unliviable in for all the restaurant and shop owners asleep in their establishments.

The air became unbreathable immediately, while tear gas set fire to the plastic covering of a jungle building. Immediately a dozen residents worked to put out the fire before it reached the other houses around it. This area is densely populated and full of shops. While all this was happening, one bar in the jungle opened its doors to give shelter and comfort to those who returned from the motorway. In the unbreathable air, they lit fires to withstand the cold. Slowly the jungle went to sleep, until a few hours later when the state bulldozers went to work again.

This latest night of unprovoked aggression by the French state against the people of the jungle once again shows the levels of systemic brutality that the government is willing to use. Tear gas is one tool of the state to try and make life unlivable, to disperse people away from the jungle towards the “centre des répit” and the closed container camp, in order to further control and restrict people’s freedom of movement. It is no secret that the government wants the jungle gone, with the deputy mayor of Calais recently stating in an interview with Kremlin owned state media Russia Today “there are a lot of things created there which is…which are illegals (sic) they must disappear”. Yet still in the face of this sustained level of repression the residents of the jungle exhibit a burning defience towards the will of the state. However much the state tries, the people of the jungle cannot and will not simply disappear!