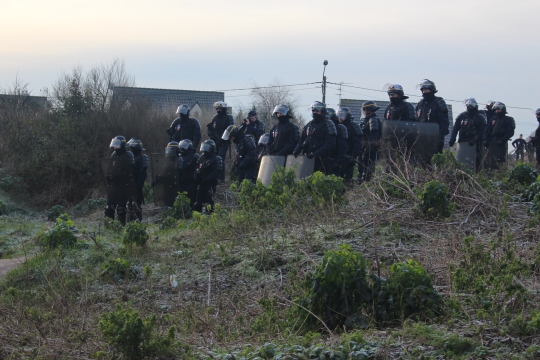 At 8:30 this morning, the police gathered at the edge of the Jungle near the bridge over the highway on Route de Gravelines. This is the entrance to the site closest to the home of the supporters of the neo-nazi group Calaisien en Colere. The bulldozers came into the edge of the Jungle under police protection, transforming the pedestrian entrance into a flattened road, destroying the large area of trees closest to the highway and clearing a huge area with 2 giant earth movers and a crane.  After the rapid auto-eviction that occurred in the last week, there were few residents left in this area of the Jungle. Those who did choose to remain were furious, smashing their houses and screaming their discontent at the cops but their resistance was drowned out by the noise of churning bulldozers and they were outnumbered by the herd of journalists there to record the eviction.

This eviction happened with little resistance, the homes of most of the people living in this area having been relocated to other parts of the Jungle. As the State begins to force the residents of the Jungle into a smaller and smaller area where will the next eviction come, there is now very little space left. The police ordered people to move and they complied, this has been a pattern with evictions in Calais for many years. However every now and again, after continual police repression, those under threat of eviction come together to resist. The next time they come to take a piece of the Jungle, they can only expect one thing, a fight!