The squat in Coulogne continues to be attacked and harassed by local extreme-right fascists who’ve formed a group “Sauvons Calais”, (“Saving Calais), led by Kevin Reche – pictured below with the swastika tattoo, who also launched a facebook group by the same name.

“Sauvons Calais” is using the facebook group to mobilise local fascists to post pictures and target squats they believe are being used by people from mainly northern Africa and the Middle East for shelter.

Members of “Sauvons Calais” posing with a “SS Nordland division”, aka a swastika, tattoo in this picture…

Kevin Reche on the right.

And here with “Sauvons Calais” t-shirts… 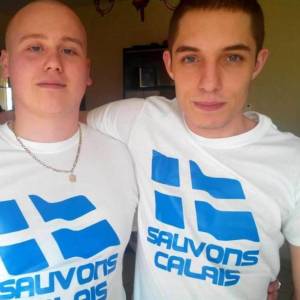 “Jimmy” on the left, also a member of another fascist group “Génération Identitaire”.

Some of the same people in “Sauvons Calais” are also known to be well connected to another extreme-right fascist group – Génération Identitaire – who attacked a mosque in Poitiers in 2012 and hung a banner saying ‘Islam out’, and whose mission statement about the ‘Identity Movement’ declares :

“Our identity is to be defended at all times.. and oppose all that may be offensive to that identity. The [Génération] Identitaires therefore gather all those who believe that preserving identities against the world steamroller is a historic mission. We want to raise the standard of identity against uniformity. The identity commitment arises from the roots and thus the idea that we are the result of land and lineage, a link in a chain.”

Let their be no question that it is white supremacist proud-to-be-Nazis behind the new “Sauvons Calais” group, mobilising against “immigrants” and their supporters …

2. Shut down the Facebook page: Go to the page and click the flower icon next to the Message button to report it for harassment/threatening behaviour. If enough of us do it, it might just work!
https://www.facebook.com/page.sauvons.calais

3. Share this info on social media; get friends to report the FB page too.