How to (nearly) incite a riot: Lessons from the French police in the Jungle 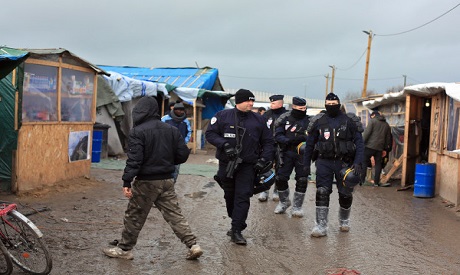 On Tuesday the Calais police made a dangerous move to fuel violence in an already-tense moment in the Jungle. If violence erupts, the state will have the blood on their hands. For now, the communities in the Jungle have refused to rise to the bait.

On Monday night, conflict broke out on the motorway near Marck, between predominantly Afghan and Sudanese groups attempting to make the crossing to the UK. The police were called in with water cannons to disperse the crowd. In the course of the evening, 15 Sudanese were hospitalised and one was killed. The exact circumstances surrounding his death remain unclear.
On Tuesday, a gang of at least 20 cops – some CRS, some Police Judiciare – entered the Jungle at approximately 6pm. They marched to the intersection on the main road where the Sudanese and Afghan neighbourhoods meet, held formation, weapons ready, and seemed to post a single photo on the wall of a building.
The photo was apparently a close-up image of the man who had been killed the night before. Dead.
The police stood in formation and watched, with one filming those passing by. They then marched through the Jungle, concealing themselves in the La Vie Active container park, surrounded by fences and private security. Before leaving, one of the Policia Judiciare, having his unmarked car filmed by an activist, physically grabbed and threatened the activist, while a colleague threateningly told them to ‘Take care.’
Once the police were gone, tensions began to rise. The conversations spread throughout the Jungle like wildfire. The usual groups of twos and threes on the main road were replaced by bigger groups – five, ten, fifteen, mostly divided by nationality.
The outrage in the Sudanese quarter was palpable. One of their brothers had been killed the night before, and the police had piled insult and disrespect onto the tragedy, by photographing the deceased and then posting the photo in the middle of a public place, like a looming threat or a game trophy to be paraded through the streets.
Africans of different nationalities began to group together and Afghans with cricket bats, pipes and planks of wood began to fill the streets, milling about, as tensions rose.
Remarkably, the afternoon ended in relative calm, though the possibility of violence has far from gone. Several reports have said that community leaders managed to defuse tensions before they erupted into serious violence. While the ongoing tensions between different communities in the Jungle are constantly exacerbated by the state, via evictions and the resulting overcrowding, the police intervention surrounding this murder seemed deeply irresponsible at best, and outright criminal at worst.
Whatever the circumstances surrounding this man’s death, to post a photo of a dead body in a public place, at the geographic juncture between the two primary communities involved, is an insult to the deceased and to the community. It is also an incitement to violence.
Like spreading rumours to stoke existing tensions, the police’s move appears to have been aimed at inciting violence in the Jungle, as happened in February. After the photo posting, they left and were not to be seen. They chucked a match into the petrol and then walked away.
The lack of violence following the death of the Sudanese man and the following instigations by the police, is a testament to a collective maturity winning out in the Jungle under massively unfavourable circumstances. The actions of the police provided more than the kindling, but also the spark for a wildfire that very nearly was. Even before the police arrived, violence between communities was a very-real possibility; after their intervention, it seemed almost inevitable. Yet the moment passed.
Of course, the police will deny any ill-intent, and argue that they were simply investigating the death of the night before and searching for witnesses or new information. But such tactics must not be allowed to pass unnoticed. The police and the prefecture know that clearing the Jungle faces many obstacles, from both the people living there, as well as the political fall-out of the heavy-handed action that a major eviction would inevitably require.
If the boiling anger of 9,000 people living in often-subhuman conditions can be used as a tool to either destroy parts of the Jungle itself (through riots and arson, etc), or as a pretext for escalating police violence, then the police will surely do their best to exploit and encourage this anger. Which is what they did on Tuesday.
What may appear one of the cops’ more innocuous interventions into the Jungle on Tuesday, very nearly became one of their most-destructive. So far, the levee has held against immense odds, but if it breaks, the state will have blood on its hands.