80 people from Syria who are stuck in Calais are demanding safe access to the UK where they hope to claim asylum. Having escaped the horrors of war and persecution they are now welcomed in Calais by a new security fence and hundreds of CRS thugs, both of which are funded by UK money. The Syrians in Calais call on the UK to respect its international commitments and allow them to claim asylum without having to resort to extortionate or dangerous methods. Many people have severe injuries from their attempts to cross. Forced to live on the streets with winter setting in the situation is desperate. This is the reality of how Europe receives those most in need.

Beginning on the 6 November the Syrians of Calais will protest everyday by the entrance to old Salam, 2-5pm. They demand to speak to a representative from the UK to discuss allowing them safe passage to claim asylum and to end their suffering. 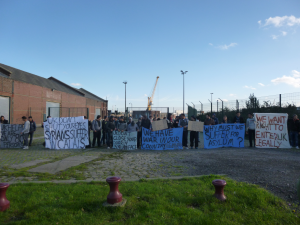