The new squat, on Impasse des Salines, is facing court on Thursday 24th. The owner is asking for a fast eviction procedure on grounds the site could contain dangerous chemicals; even though the risk is minimal. Many people have moved to the outside yard as precaution and Medicine du Monde have now erected three large tents with toilets, showers and places for people to wash their clothes and where some people can sleep in the night.

There are about 100 people living at the site, and more coming to use the space during the day. The police have not been entering and it has become a precious and rare place where people can relax and do not have to fear constant harassment from police.

But the fast court procedure could see an order for eviction after only two weeks of people taking shelther there.

Diagram of the squat: 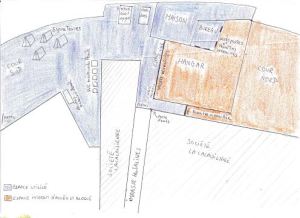 Outside in a new jungle there is also a larger occupation near the Tioxide Factory, where several hundred people are living, which is also threatened with eviction.

At least 4 new companies of CRS (riot police) have arrived and a small police plane has been circling. People living in the jungle are on alert and are very nervous because of increased presence of police and some people have heard there may be an imminent eviction.

There are lots of women and under-age kids living in the jungle. People are scared of police controls and raids, and are nervous about another brutal eviction.

To move hundreds of people will mean another large and forceful police operation that would likely result in many people in detention and facing deportation, as well as many back on the streets again trying to find somewhere to go.

Come support the Impasse des Salines squat and the occupation at Huntsman Tioxide!

Useful things to do and bring :

– bring tents, sleeping stuff, tarpaulin, shoes etc.. it is always needed and vital for supporting people to exist in this place.

– save as many tents as possible if there is an eviction! It is very useful to have people with vehicles who can save tents and belongings before the police destroy them or take them to the dump.

– bring cameras for documenting the police, *not people living there!

And prepare yourself to come! See here for a brief intro on coming to Calais.