Since the destruction of the two camps on May 28th, ordered by the city, between 200 and 300 refugees have gathered together at the food distribution center, SALAM.

They are refusing to disperse and demand that the authorities tell them where they can go to live in peace.

For the first time in Calais, the Sudanese, Eritrean, Afghan and Syrian communities are all united, and for the first time the prefecture has sent a mediator to ‘negotiate’ with the migrants.

But since the May 31st, the negotiator has not returned. The migrants are left in uncertainty. Can they remain at SALAM in peace or do they have to fear eviction in the coming days?

The testimonies of police brutality against isolated people in other parts of the port don’t inspire anyone to leave the group. The list of demands drafted by representatives of each community were taken to the sub-prefecture on May 30th.

Faced with the silence of the authorities, the refugees living at SALAM decided to hold a demonstration in the streets of Calais last Saturday, June 7th, to call attention to their demands and call for the resumption of negotiations.

A few stayed in the camp to keep watch, while more than 200 others, refugees of all nationalities and their supporters, marched toward the town center with drums, banners, signs and fliers to inform the populace.

A communique with their demands.

And another (in French) denouncing the town hall for evicting the camps just so the tourists who come for the maritime festival “Escale à Calais” [Port of Call Calais] don’t have to see the miserable living conditions of the refugees in Calais.

The little fascists of ‘Sauvons Calais’ followed the demonstration from afar, but did not manage to disturb it. One of them stuck his arm out in a Nazi salute, only to take to his heels and run. Another drove by in a car, shouting “they all belong in the oven!”, right beneath the eyes of the police, who did nothing in response to his inflammatory, hateful comments.

In general, passers-by reacted to the demonstration with goodwill and accepted the fliers. New supporters followed the group, which stopped for a moment in front of the town hall before continuing toward the theater and returning to the camp, two hours after they had left.

If the authorities continue to ignore the united communities of the camp at SALAM, more demonstrations will certainly follow. 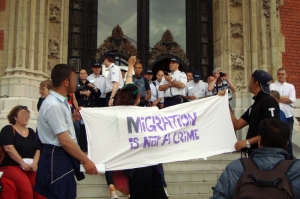