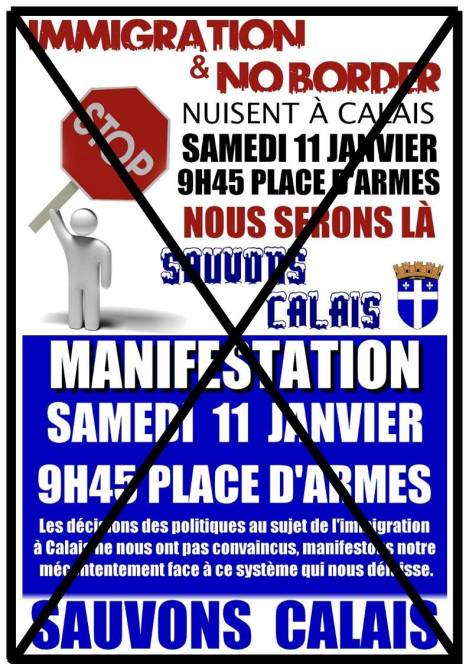 The anti-migrant and idiot collective “Sauvons Calais” which appeared last October plans to hold their anti-migrant demonstration this Saturday, 9:45 at the Place d`Armes. They are demanding:

but seem to forget to protest against the border controls that keep people stuck for months in this miserable city or the lack of accommodation for migrants forcing them to squat in derelict properties or sleep in tent camps. Theirs is truely an analysis that only goes skin deep…

While primarily an online presence (https://www.facebook.com/page.sauvons.calais http://sauvonscalais.wix.com/sauvons-calais), on the 8th of November about forty people from this group stood outside the townhall in the rain looking quite sorry for themselves until Philippe Mignonet came out to thank them for their hard work. 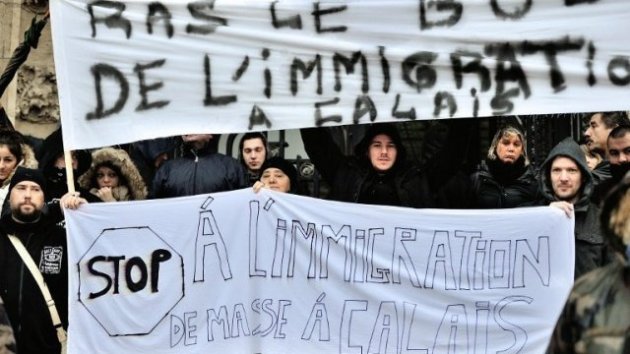 After this they had to cancel two demonstrations (one at the court case of Victor Hugo and one at S.A.L.A.M. in December), after the police and townhall asked them not to come as they would inevitably have a problem. However, this time they are allowed to go ahead. According to their Facebook page over 100 people appear to be coming. Furthermore, the callout of this demonstration is posted at the webpage of the French far-right “Jeune Nation“.

This demonstration is taking place soon after a series of fascist attacks in the city leaving the showers for migrants burnt down and the windows of cars with foreign plates smashed!

We must resist this demonstration to make sure that the myopic and fascist ideology it is promoting is not able to have a platform from which to speak, and that this Facebook group remains just that; unable to garner any sort of street presence!

People in Calais would be happy to see wide support on this day!!!
If you plan to come please write an email to : calais_solidarity@riseup.net