Members of the association La Belle Etoile, who have been serving ‘exiles’ one hot meal a day at lunch time for 10 years, decided to dissolve their partnership and to stop their food distributions as of the 1st March 2013.

In a press release about their departure Belle Etoile condemn the council for the situation, which is not getting better and say they refuse to work in these conditions any longer as a prop for the authorities, and their volunteers are burnt out by it, ending :

“Our departure is not an act of renunciation but a militant act and we remain militant in the soul. We will continue our struggle acting differently, in an other level for the fundamental right to defend people.

Volunteers are not here to occupy migrant people, to show them around, distract them and somehow to maintain social peace.

For all these reasons, we call out others associations in order to follow us… “ 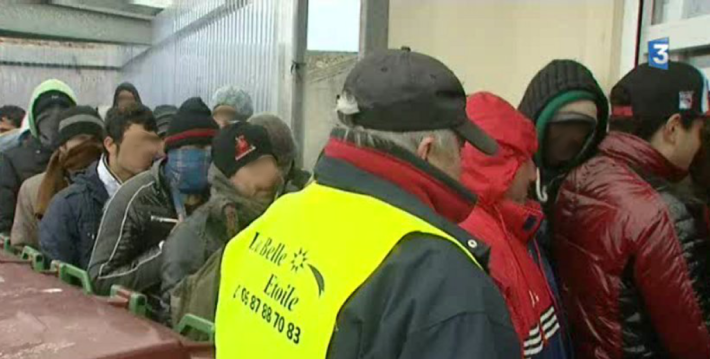 In a statement the Director, Monique, says :

“We will play the role of accompanying migrants. As we do, no one else cares to do so. We express that we are fed up in this situation that is never ending. The authorities act as if everything is fine! No, nothing is! We need the government to find the necessary finances. Namely give true and real local food for everyone. What we have at the moment is inhuman.”

A few years ago, La Belle Etoile had already tried to put pressure on the authorities by stopping the food distribution.

This time Salam no longer follows the Belle Etoile. But there are talks amongst other associations whether they can fill in some of the gaps for the food distribution.

The municipality has as yet not given any statement.