The CRS are back, Unit 5, three patrol vans. They are coming every meal time to Salam food distribution to accompany PAF and/or Police National with stop and searches of every person entering. Often there is several vehicles blocking the entrance with a ring of officers circling the gate. And several more vans parked up on the street opposite. Just watching. This has been happening everyday since Christmas. They are giving no indication of when they are going to stop these new blanket controls they are enforcing against all people going to the food distribution since the fights last week. And still daily they are demanding to know everyone’s nationality as they enter. The police claim, with no sense of irony, that is ‘for the migrants own security’. 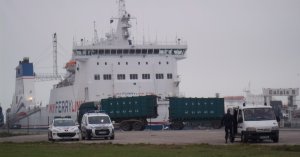 It is of course is deterring people from coming for food, making it feel even more like an open prison. Also people have again been denied entry for food, if they ‘disrespect’ the police, for the simplest forms of non-compliance.

This week the PAF raided a new squat at 5am it seemed just for kicks. They banged on doors and woke people up with shinning torches, violently throwing one person up against a wall they allege ‘disrespected’ them at Salam. The PAF threatened people sleeping there, and then left. No arrests, no-one evicted.

But in general, in the last week the atmosphere has been relatively calm and settled. There has been no more fights and there has also not been a lot of the usual street ID controls and evictions in the centre of Calais recently. Instead there’s a lot of concentration on controls over food distribution area.

These last weeks there’s been a bike sound system doing the rounds – through streets, squats, jungles at the food disto bringing lots of dancing and high spirits. Regular language classes are on the go. Basketball sessions. And workshops with people.

Support for people in detention has been ongoing. But deportations also continue regularly, particularly to Italy and Eastern Europe, but also to some non-EU states.

The winter really is hard, its still really wet, windy and cold.

Blankets, tents, decent shoes and warm jackets are an ongoing emergency. People are constantly arriving with nothing and our stocks are constantly depleting. The bi-weekly church distribution is becoming more and more irregular, and may soon close if they don’t have more support with the distribution. This would be a big problem for people, a lot of people constantly rely on these supplies.