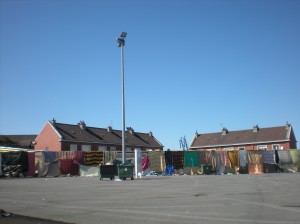 All the Associations are back from their summer break, so mealtimes at Salam have started again. With the exception that there is no longer anyone providing breakfast.

At the moment there are about 50 people sleeping inside of Salam and about 30 people outside of Salam, next to the building on the other side of the road. Because people have been there for so long, without being disturbed people have become quite settled, putting up blankets and matresses.

About 10 days ago the Mayor asked the police to remove the people sleeping there and on Tuesday last week the police came and kicked everyone out in the middle of the night. Nothing was removed and the people were able to go back inside once the police had gone.

A couple of days ago there was a meeting in the Town Hall about the issue of people sleeping in Salam. Again the Mayor has asked the police to remove the people sleeping there, which makes it pretty likely that in the upcoming week there will be an eviction of Salam, leaving 50-80 people with no where to stay.

As well as requesting the removal of the people, the Mayor is also attempting to change the agreement that the Associations have with the Town Hall. The Mayor wants a new agreement which says that if people are sleeping inside of Salam that it can be closed down. They also want to include in the new agreement that people from No Borders will not be allowed inside of Salam at all. At the moment we do not know how the Associations are going to respond.

Africa House is also still awaiting eviction having received eviction papers about a month ago, we have no idea when this might happen.