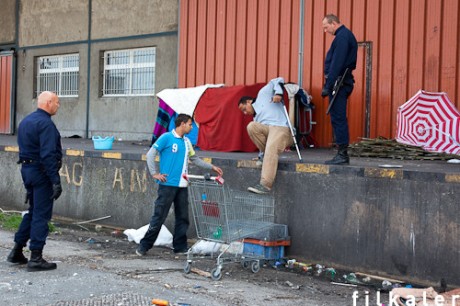 Policing with “dignity” in Calais

Monday 10th August: The picture above shows CRS (riot) police clearing the Palestinian jungle in the centre of Calais. The officers stand by while a man on crutches is forced to climb into a shopping trolley helped only by his frend.

As Immigration Minister Besson announced last night (10/8/09) that he would provide free showers to migrants (four of them for 120-1800 people) as a measure to treat the scabies epidemic (showers do not treat scabies, which he knows being a former doctor) and demanding that the local authority support this work for “as long as it takes” (the same local authority that in July refused to allow humanitarian associations to set up showers), this photo show the reality of the “dignified” treatment of migrants in Calais that Besson has been infamously quoted as saying he supports.

2.00pm CRS arrest two people by the marina in the centre of town. This is filmed and documented. As the unmarked arrest van and CRS van escorting it wait for the swing bridge to shut and make their way back into town, there is a call from the Palestinian squat near by (attacked by police yesterday) that CRS have returned. Activists and journalists arrived as a CRS van pulled up and an officer jumped out wielding his baton in the air, making towards a group of migrants sat by the local fishing boat dock. As activists cycled up a second officer was getting out of the van with his tear gas canister ready, saw he was being watched and called his colleague back. The arrest van and escort CRS van arrived, the escort van immediately headed off , leaving two vans of CRS to confront activists.

The journalists filmed and observed discreetly from inside the Palestinian squat. Activists placed themselves between the vans and migrants at the dock and in the squat. After a brief standoff activists were made to hand over ID for checking. During the radio check demands to “back off” were repeatedly made by the police; “if you can’t speak French go back to England”; when we spoke in French being told we could not take photos of police. We were asked if we had press idea, and that “if you are press you can take photos, no press, no photos” so they seem to have understood that bit of law. We were also informed several times that “we are the police, you are not the police”, which was a helpful confirmation of our respective roles.

In French law you can photograph police, but it is the way in which those images, and anyone else’s images in France, are subsequently used that is the issue. Activists were then photographed from about two feet away, an attempt at intimidation as much as one of intelligence gathering.

We occupied their time for at least 30 to 40 minutes, while some migrants walked off, or remained cooking their meals unhindered. This felt like a real practical prevention of police attempts to hassle, arrest and quite clearly attack (evidenced by the raised baton and charged tear gas canister) migrants in broad daylight in the centre of Calais in front of tourists and Calaisiens. This was made possible by our numbers increasing only slightly today, so come to Calais and continue the work to support migrants here. Lots of recent info elsewhere on this blog.

Around 9.ooam the CRS had blocked off the road leading to the middle of the Pashtun (Afghan) jungle and unconfirmed reports of 20 to 30 CRS vans driving past. Also unconfirmed reports of them driving into the jungle, spraying the one water hydrant with tear gas, and filming people in the jungle. When we arrived a man with a fresh head wound pointed towards a recent police presence. It may be that this was a CRS battalion, usually of around 24 vehicles, redeploying and making a show of force on its way out of Calais. There is one battalion of CRS riot police for each department (province) in France, with the Pays de Calais battalion permanently deployed in Calais and one from elsewhere, making a permanent prescence of 2 battalions at any one time, with about 100 officers each.